Scottish Stained Glass is well known in Houston and nationwide for creating the highest quality stained glass windows for more than 20 years. Our local artisans combine the same ancient stained glass techniques used by Scottish craftsmen for centuries, with the most modern materials and installation techniques.
Although most people consider stained glass to be all about beauty and elegance – and it certainly is that – it can also have some very practical benefits. For residents of Houston, stained glass of our handcrafted quality adds value to a home or commercial building. It can also add privacy and uniqueness to a home’s entryway or bathrooms, and a feeling of exclusivity to a salon, spa, office, or high-end restaurant. And it can block an unappealing view, replacing it with something stunning, without blocking the natural flow of light into the building at the same time.
All our Houston stained glass panels are manufactured and installed to local building codes and meet the most modern energy efficiency standards. As the largest stained glass studio in the U.S. today, we have produced and installed custom stained glass windows for more than 12,000 satisfied customers to date. Owner Martin Faith emigrated from Scotland over 25 years ago. He brought his native land’s stained glass expertise with him. Over the past 25 years, Martin has used traditional methods as a starting point for developing his own process. It includes modern methods for hiding the points where the leading (known as “caming”) joins together, darkening the lead to an antique looking finish, and a proprietary polishing process which makes Scottish Stained Glass windows glow, even without the help of the sun.

Houston Custom Stained Glass Design Process: It Starts With You 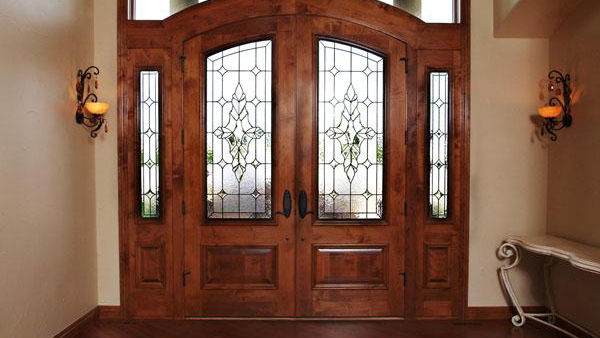 Our stained glass designers work one-on-one with clients, taking in the client’s existing architecture and décor, and the client’s personal tastes. During the initial design consultation, clients have the opportunity to discuss their ideas and look at many samples, sketches, and photographs, while collaborating with one of our local Houston designers.
Back in our studio, the custom design process continues using CAD and photo-shop technologies to create beautiful works of art that exactly conform to clients’ needs and specifications. Please take a good look at the detail and quality shown in the lovely photographs below, or visit our design galleries to see more examples of our workmanship. 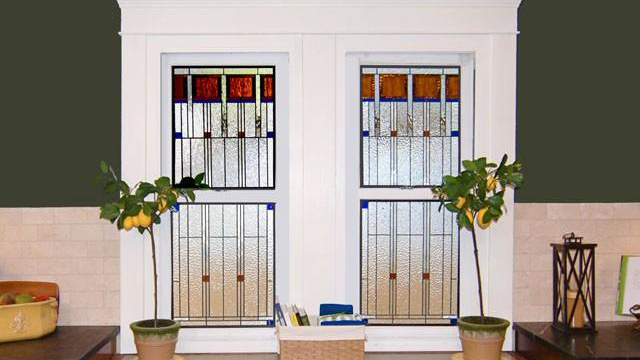 Of course, you take great pride in your Houston home, carefully finding the perfect furnishings that delight you and the artwork that inspires you. If you are looking to add beauty, value, and distinctive style to your entryway, windows, doors, sidelights, transoms, and skylights, we hope you’ll consider us. We would love to earn your business. Over the years we’ve found that our residential clients truly appreciate vividly colored stained glass but generally prefer something a bit more subtle and elegant for their homes. Our most popular type of residential stained glass is actually colorless, made with frosted, textured, and gorgeous beveled stained glass. This works with any color scheme and lets in as much natural light as possible. 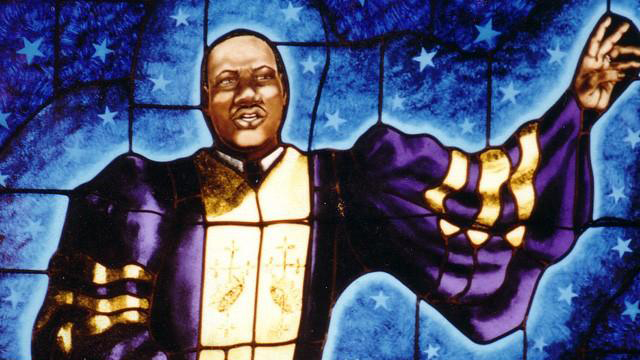 In business for over 20 years, we’ve installed over 40,000 custom stained glass windows for delighted customers. As the largest stained glass studio in the U.S., we have the experience, the talented artisans and the technical expertise to design and install any type of stained glass panel, including replicas of ancient stained glass and antique stained glass restoration as well.
Our Houston stained glass is available in a wide variety of styles, from classic Celtic and romantic florals, to Frank Lloyd Wright inspired modern designs and our own signature Aspen collection. However, you will be working to create your custom design with one of our talented pros, so if you have your own ideas those can be easily accommodated as well. Browse through our design galleries for some Houston stained glass inspiration.
We find many Houstonians have long admired stained glass, but have never realized how affordable, practical and easily installed it is. Our prices start as low as $80 per square foot. As for the practicality aspects, stained glass windows afford greater privacy where necessary, or block an undesirable view with the use of textured glass. All this, while still letting the natural light stream through into your home. 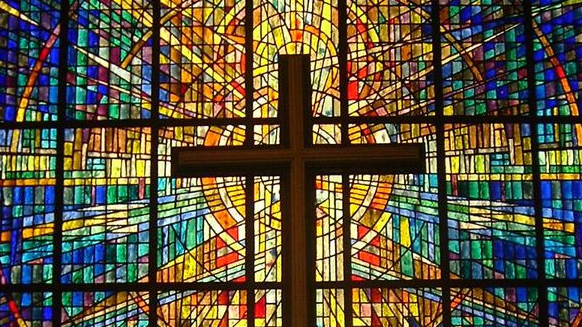 Contact us today for a free, in-home consultation with a stained glass designer. They will show you samples, ideas, and offer suggestions. If your home is an older style, they will even research what style of stained glass windows would provide an authentic complement to its history. Please let us earn your business!
Scottish Stained Glass is active in social media, so you can find out about us and see what we do in many different ways. Follow us on Facebook, or check out the beautiful photos of our work on Flickr. If you are looking for custom designed stained glass in Houston or anywhere across the Lone Star State, please contact us by phone or using our convenient online form. 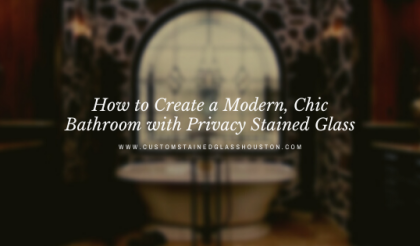 How to Create a Modern, Chic Bathroom with Privacy Stained Glass

Creating a beautiful bathroom isn’t as easy as it seems. You have to pick out all the right colors, patterns, and materials, and somehow make them come together. But we have a secret solution that we’re about to let you in on. Meet privacy stained glass. Your Houston home is about to be beautified.

Just like it sounds, privacy stained glass is stained glass that’s used to block views and create privacy. Unlike other options like blinds and curtains, it doesn’t block the sunlight, which is important when you’re working with a small space like a bathroom. And it’s perfect for tying the room together. Trust us, once you see how different it can make your bathroom look, you’ll totally fall in love.

END_OF_DOCUMENT_TOKEN_TO_BE_REPLACED 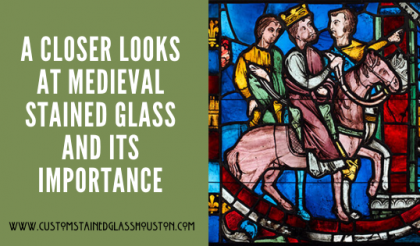 A Closer Look At Medieval Stained Glass And Its Significance

Medieval stained glass is, first of ancient, and identified by its unique use color. It is sometimes painted glass and gets its name from the medieval period in Europe which went from about the 10th century to the 16th century. Much of the stained glass during this period was made up of picture representation: saints, biblical scenes and iconography were are richly displayed. While the reason for this shift to depictions is not exactly clear, it is often thought it was due to the emerging color technology, which gave artists the ability to better use fine detail. One of the first examples of colored window glass is from 800–820 from excavations at the Abbey of San Vincenzo in Volturno, Italy. The medieval period, rich in colored stained glass, started less than 200 years later–meaning it could have been the invention of color that inspired the next 500-600 years of works.

The Colors of Medieval Stained Glass

As you now know it is the colors that set medieval stained glass apart. So, what type of color was used that so distinguishes this period of stained glass history? Quite a few actually. Impurities in the silica used to make the glass are the reason for most of the colors and this was as often a mistake or experiment as it was intentional. However, some colors were fully developed and dialed in during this span of the Medieval period.

One of the most gorgeous colors in Medieval stained glass is the blue soda glass. The early medieval glass was chemically soda-based. While this blue is stunning, for reasons unknown blue soda glass was quickly replaced with Forest glass. But in its short time, this use of blue was prolific. There has been blue soda stained glass found in UK excavations at Old Sarum, Winchester and even some in France.

Green and red stained glass occurred naturally in many cases because of the aforementioned impurities in the silica. However, as the medieval time progressed the colors were likely made by adding copper– in the form of ore or copper filing.

In the early Medieval period, unique colors could be brought forth by carefully controlling the furnace conditions (heat and length of fire). What really was happening was an increase or decrease in oxidizing. But, later in the Medieval period (the 14th century) silver stain was introduced which made it possible to create a wider variety of glass hues by painting on this chemical mixture.

The Importance of Medieval Stained Glass

As you well know, Medieval stained glass windows were a very long time ago. Be that as it may, they have had a huge impact on the modern glass we see today. Primarily because this was the first era that not only introduced color into stained glass but led to the development of many of the same colors we use today. Furthermore, with the use of color, this period of time started an era of life-like representations of people, places, and things–not unlike much of what we see in stained glass today.

For more information on stained glass or to get a stain glass windows designed for your Houston home, contact us here at Custom Stained Glass Houston today! 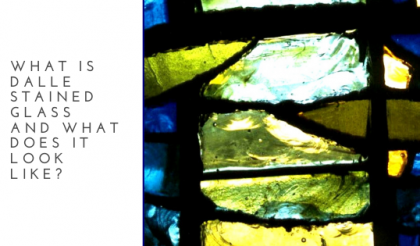 What Is Dalle Stained Glass and What Does It Look Like?

In case you haven’t heard, stained glass windows are one of the most popular trends this year in home design. That’s right, the same trend that was once popular for churches in the 16th century has now made its way into modern homes. Modern designers and architects have started using the vintage feature in new and exciting ways, which includes incorporating it into kitchens, bathrooms, and entryways.

Among the many styles of stained glass that are trending in Houston includes Dalle de Verre. If you’ve never heard of Dalle Stained Glass before, you may be wondering what it is and what it looks like. In this article, we’ll discuss some of the characteristics of Dalle Stained Glass and ways you can incorporate it into your Houston home.